At the weekend I spend some time reading articles in a German journal about some recent buzz words in software development, mainly Continuous Delivery (CD), DevOps, Microservices, and Docker.

While we all are pretty familiar with version control systems (VCS), those concepts mainly focus on everything which has to do with the software development process and what happens after someone checks in a newer version of a file being used in a software product. I personally grew up with a local version control software like RCS, moved over time over to client–server based VCS like CVS and Subversion, and finally ended up using distributed VCS like Mercurial and most of my time git.

While most companies will host their own repositories for software development in-house, there are a couple of services you can register for as a single developer, most useful for open source software:

I personally use all three systems and I'm sure there are more providers offering a service like this. Before digging deeper into the topic how to set up a system like that yourself you should look around and gather information about the pros and cons of each solution. They change over time and I expect them to provide more or less the same services over time.

Independent of what other services you will use during the software development process, there is always a need to communicate in your team and probably as well with customers and users of your software. At work we use mainly two systems:

They both go far beyond simple chat programs. For example we use Slack for communicating information to and from developers:

One thing to be aware of is that you might want to see what's going on while traveling or being away from a secure connection to your local company network. Links provided to your in-house repositories or ticket system are only pointing to valid information while you are connected to your Intranet, e.g. via a virtual private network (VPN). Nevertheless you might want to see that there are actually updates happening.

Get Your Hands Dirty

Let's motivate this with a little example. In the following you will:

The two (partial) libraries should be small enough to learn from but they do come from a prototype I wrote 20 years ago in another programming language (Python) and got translated for production into C/C++.

Back then we wrote software for (another buzz word) Virtual Reality (VR). Basically a user could navigate with a joystick (with 6 degrees of freedom (DOF)) through a virtual model of Berlin. The joystick had also a touch screen with some tourist attractions stored for simpler navigation. Let's say the user gets lost while flying over Berlin with a certain speed in a certain direction. So he could press the touch screen and navigate to one of the tourist attraction points, let's say the Brandenburger Tor. So all the docking points you could fly to had a fly-in Spline curve (so you approach from a certain direction in a certain altitude). The current location and the tracked positions in time and space define (or can be used to define) another Spline curve. So what you need to do is to create a Spline curve in the middle, between the docking curve and the user defined curve while flying/navigating around the virtual city model, calculate the length of the (combined) curve to switch to auto-fly-mode and bring the user back to the Brandenburger Tor with a proper speed and a smooth navigation curve. Of course this is far more complex then in the source code I will provide, but the source code is complete enough to demonstrate all aspects I was talking about earlier.

With Rust your project can be organized in a way that Cargo can be used to compile libraries and executables as well as create documentation from source code, similar to Doxygen.

Build documentation (including info about other libraries, called crates in Rust language):

Here is how the documentation for the libpath.rlib library looks like:

Click on PathBuilder to see that you use a struct called PathBuilder to call add_point a couple of times between new and finalize. The documentation tells you also about an alternative function called add_sorted_point which allows you to add the points in any order (regarding the time you call the function), but order the points using additional information (param) to sort by those values instead of the time of the function call.

So far we had to install Rust and Cargo locally to compile, test, and create documentation. If you look at the rs_path project on GitHub you will see a little green button (if the build was passing) created by Travis CI:

First familiarize yourself with Travis CI by reading some basic information and follow the instructions there. After that read the Rust specific info. As you can see our rs_path project depends on another library (or crate) called nalgebra:

But where is the green button coming from? It seems to be part of the README.md file. Well, it is:

If you click on the button your should end up here: 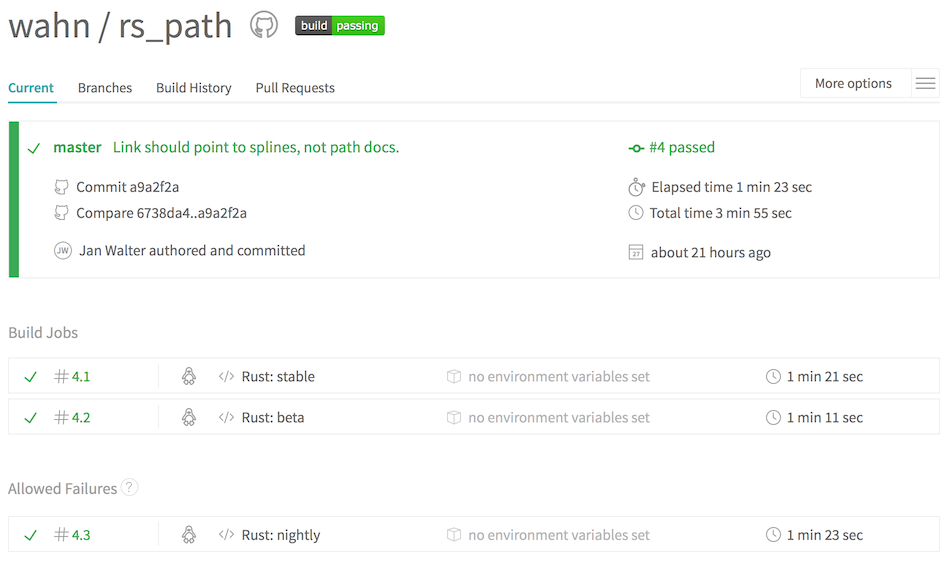 As you can see it builds (after each commit) with three Rust versions:

This way I can easily see that my code might brake with a non-stable (or an upgraded) Rust version without the need to install all versions locally.

Dependent On A Not Published Crate

Build documentation (including info about other libraries, called crates in Rust language):

Here is how the documentation for the libsplines.rlib library looks like:

Click on BezierCurveBuilder to see that you use a struct called BezierCurveBuilder to call add_cv a couple of times between new and finalize. This implicitly defines the degree of the Bezier curve. The documentation tells you also about an optional function called set_interval which allows you to overwrite the default interval of [0,1].

Finally click on the BezierCurve to see four functions you can call on the finished curve (once you called finalize on the BezierCurveBuilder). Three of those functions were tested above with example code running parts of the library. I think you get the idea ...

If you think this was complicated then be assured that this was just the tip of the iceberg. Taking care of all the tools involved in the software development process can be far more complicated. That's why you should wisely choose which services to pay for and which parts should be protected by taking care of them yourself (e.g. for security reasons).